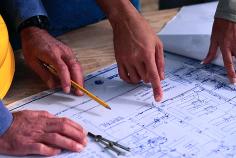 The Building Department keeps up with the latest information regarding the building codes that need to be enforced.
On October 1, 1991, the Uniform Codes Act became effective in Georgia. On July , 2004, this Act was revised to make the following eight construction codes mandatory as the Georgia State Minimum Standard Codes. Listed below are the code editions adopted by the Georgia Department of Community
Affairs as of January 1, 2007:

All of the above codes have Georgia Amendments.