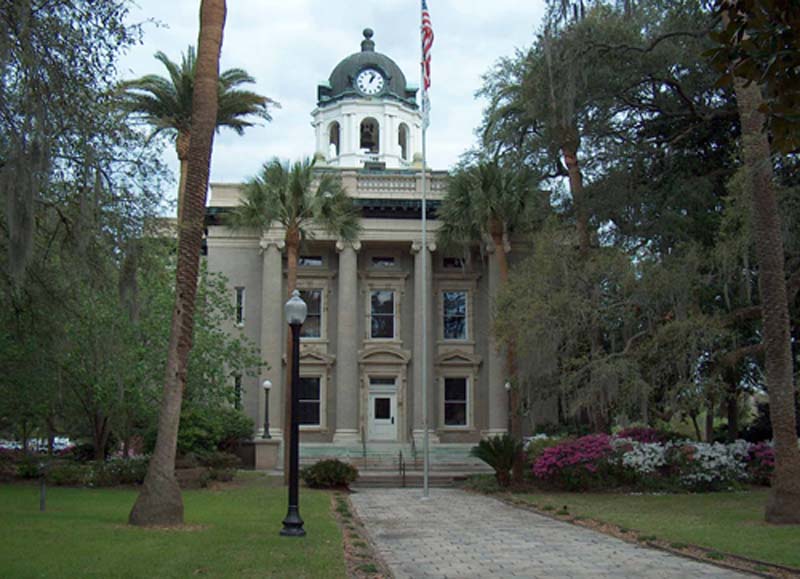 Established in 1777 and named for John Glynn, a member of the Parliament as well as a friend to the colonies, Glynn County is one of the eight original counties of Georgia. Brunswick became the county seat in 1797; the town, however, was laid out in 1771 following the Oglethorpe Plan of parks, squares, and boulevards, much like Savannah. The town consisted of a rectangular tract of land, 383.5 acres bounded on the north by ‘F’ Street, on the east by Cochran Street (now Martin Luther King, Jr. Boulevard), on the south by First Avenue and on the west by the Brunswick River.

The Historic Glynn County Courthouse, built during the transitional period from Victoria to Edwardian, reflects an eclectic style of architecture. The historic structure retains many of its original features such as a symmetrical Victoria interior plan and neo-classical window details.

Today, the courthouse stands majestically among the balmy palms. The glorious magnolias and the moss-draped oaks rest at the foot of a lush green carpet of grass.
-from the phoenix group, architects

The Georgia poet Sidney Lanier immortalized the seacoast here in his poem, "The Marshes of Glynn", which begins:
Glooms of the live-oaks, beautiful-braided and woven
With intricate shades of the vines that myriad-cloven
Clamber the forks of the multiform boughs,--
Emerald twilights,--
Virginal shy lights,
Wrought of the leaves to allure to the whisper of vows,
When lovers pace timidly down through the green colonnades
Of the dim sweet woods, of the dear dark woods,
Of the heavenly woods and glades,
That run to the radiant marginal sand-beach within
The wide sea-marshes of Glynn;--